My wife’s brother Gary just left us after a 4-day visit from Ontario.  He calls me, “Stash,” which is short for “Stashu” (sp?), which is “Stanley” in Ukrainian, I think – long story.  My wife comes from Ukrainian and Polish roots.  My “full” nickname on her side of the family is Wujek Stashu – Wujek (pronounced VOY-eck) means “uncle” in Polish.

Gary is universally known as, “Uncle Geezer.”  There are various attributions for this moniker, but the most humourous is that he’s been acting like an old man since he was about 10-years old.  A more generous reason may be simply that he’s the oldest of his siblings.

ANYWAY, the whole nickname thing got me thinking.  Gary (Geezer) spent 4 days in my house and never once called me, “Stephen.”  And I loved it.  I don’t think I ever addressed him as anything but, “Geezer,” either.

The famous saying is that, “familiarity breeds contempt,” but I don’t think that applies in marketing.  If you are so familiar with something/someone that you have nicknames for each other, then you have a real bond.  Granted, it COULD be a negative bond (like if your nickname for your supplier is, “leech”).  But more often than not, if your customers have a “pet” name for you, it’s a good thing.

A few weeks ago, I posted about the new vector the Nigerian scam has taken – through Facebook.

Now, it seems, the original money-makers on the World Wide Web, the pR0n dealers, have discovered Facebook as well: 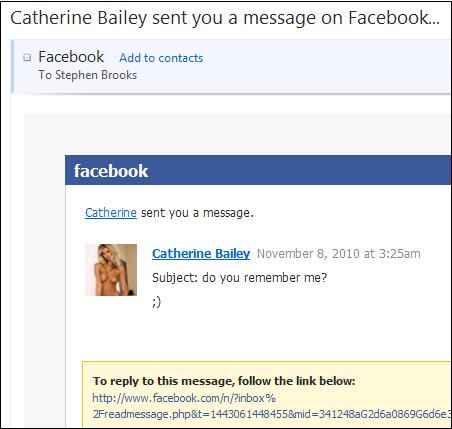