Dan Martell, who is sort of a techie-entrepreneur-evangelist local success story, made a list of the, “Top 10 New Brunswick Bloggers Worth Checking Out.”  And I’m on it!

How Maple Syrup Was Invented (My Theory)

Yesterday, Derek had a post about a non-geotropic icicle at his house.  It got me to thinking about my own icicle story – it’s about icicles AND maple syrup.

While Québec is the largest producer of real Maple Syrup; here in New Brunswick, we have a pretty solid industry built around it.  Of course, maple syrup is only one of the products you can make with the sap of the Sugar Maple: maple butter and maple candy are also popular, especially in these parts. As a matter of fact, there is an annual tradition for most people to take their kids out to the “Sugarbush” to visit a “Sugar Camp” AKA “Sugar Shack.”  Here you see my daughter and three neighbourhood friends about to enjoy their treat of some hot thick maple liquid, which is kind of halfway through the refining process between syrup and candy.  Here it is being poured onto some snow, where the kids roll it onto popsicle sticks and it cools into a kind of lollipoppish thing. 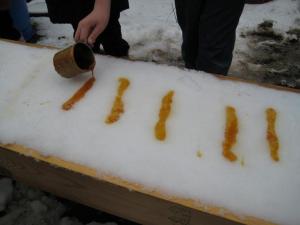 For those who don’t know, maple products are made through a series of evaporations.  The sap that is taken directly from the tree is boiled until most of the water is gone and the sugary part dominates the liquid.  That’s syrup.  You get about 1 part syrup for every 8-10 parts sap that you boil.  Boil it some more, and pour it into molds, let it harden – that’s candy.  The technique was probably discovered by the Algonquin First Nation, but there are other theories.

Anyway, my question has always been, and the Web doesn’t even seem to know the answer, what prompted some nutcase hundreds or thousands of years ago, to boil tree sap and then eat it?  Did they try this with everything?  Was there some mad proto-scientist who went around boiling random things and feeding the results to people to see what happened?

For years I wondered about this, and then, last spring, I figured it out.

First, some physics about how maple sap is collected.  Or, more importantly, when.  It can only be collected in the spring, when the temperatures drop below freezing at night and rise above 0°C during the day.  As you know, water expands when it freezes.  So the night-time freeze forces the sap (which is produced by the roots) up the trunk of the tree to nourish the buds that will become leaves.  During the day, the sap melts inside the tree to become liquid again.  That’s when the taps that have been hammered into the tree trunk drip out the sap into waiting buckets.

But the question remains; who figured out it was worthwhile to do all this?  I got my answer one spring evening when I noticed an icicle, about 30cm long, hanging from a branch of the sugar maple in our front yard.  Nothing strange about that, but then I noticed that there were no other icicles on any other tree in our yard, or any other on this particular tree either.  I then noticed that this icicle was emanating from a place where that branch had been broken during the winter – probably by ice/snow overload or something.  Therefore, the icicle hadn’t been formed by rain or snow-melt — it must be frozen liquid that came from the tree.  I broke off the icicle (like people, including Algonquins, have been doing for millennia), and tasted it, and it was decidedly sweet.  Aha!  So I rushed inside and put the icicle into a pot and boiled it.

Now, bear in mind that the total volume of this icicle was only about 100ml.  But I did triumphantly produce about half a teaspoon of syrup.  Mystery solved!